All classes will be recorded and distributed to registrants within 1-2 days of each session. Recordings will be available for access for one month after the last session.

Dive into the Art of Kabuki Bayashi with taiko legend Saburo Mochizuki. This workshop series will give students an introduction to the rich world of traditional Japanese music. The music of Kabuki is a gold mine of patterns that can be used on taiko as well as a variety of other instruments. The Ōdaiko is not just a large drum, but it is integral to the sound effects of Kabuki plays. Learn how to play the sounds of water, waves, mountains, and more! In addition to the well-known Shime Daiko, students will learn more about the “Daishō” – Kotsuzumi and Ōtsuzumi, two special hour-glass hand drums, and how their sounds provide the backdrop for melodic instruments, the Shamisen and the Fue.

Saburo sensei’s insight into the development of taiko and traditional music is unique. As one of the original four Sukeroku Daiko members, he was influential at the very birth of modern taiko. His depth of knowledge of Hogaku and traditional musical forms and his experience fusing these traditions with a variety of different artforms gives him a truly deep and insightful perspective on the taiko world. This workshop series will be a great opportunity to learn from one of the pioneers of the taiko world.

The workshop will be given in Japanese by Saburo sensei, translated to English by his apprentice J.D. Andrade (Mukon Mochizuki).

All classes are One Hour in duration starting at:

* Only for the 11/3 class, start time is 12:00 AM (+1 day) for London due to Daylight Saving Time change in parts of Europe. Please check your local time.

What Do I Need?

How Do I Register?

This workshop is no longer available.

How It All Began

Born in 1947 in Yushima, Tokyo as Yutaka Ishizuka, Saburo Mochizuki first played taiko when he was in the fifth grade at a local Obon festival at Yushima Tenjin Shrine. He fell in love with taiko and couldn’t get enough of it that he would continue to play on the wooden pillars of the yagura tower even when kids were no longer allowed to play after dark.

Back then, taiko was mainly played at local festivals by the locals, and no one played taiko as their main profession. However, by the time Mochizuki won first prize at a local taiko competition while in high school, he was already determined to become a professional taiko player. It was his awakening to the art of taiko.

The following year, he saw a small three-line classified in the newspaper that read “Want to form a taiko group” along with a phone number. It was posted by Minoru Sanada, a Western-style dancer, who had been learning taiko in order to incorporate taiko in his dance stage. Mochizuki met up with Sanada right away and started learning taiko from him with a few other taiko players. This was the start of the first professional taiko group named Shin-On Daiko, which became the foundation of Tokyo’s pioneering taiko ensemble Sukeroku Daiko founded in 1968. 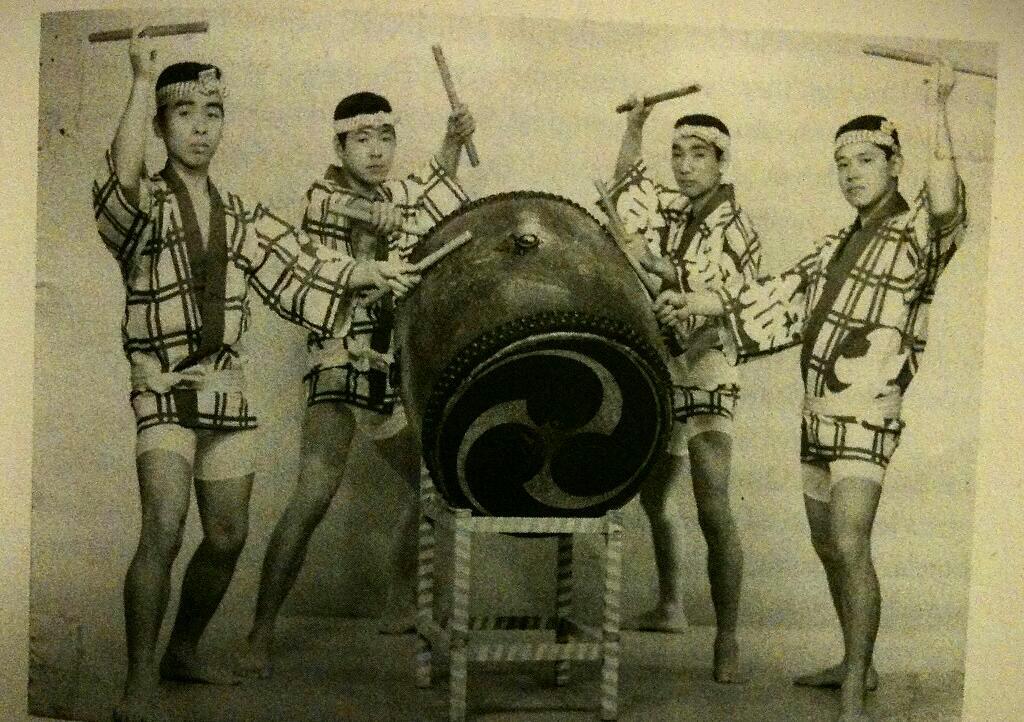 Performing and Teaching in the US

In fall 1968, Sukeroku Daiko members flew to California to perform with a famous Japanese singer of the time. They stayed there for three months, performing at San Francisco Circle Star Theater, then in Los Angeles, then finally in Las Vegas, at Hotel Flamingo.

After the tour, they went back to San Francisco to practice at the open space in front of the Japan Center every day for two weeks. Children gathered to see and dance to the taiko. There, Mochizuki taught Seiichi Tanaka, who had asked Sukeroku Daiko members for lessons after seeing their first performance in San Francisco. This was the groundwork for the now popular naname/slant and Yodan-Uchi styles across North America today. Mochizuki’s experience in the US convinced him that “even without understanding each other’s language, the rhythm and sound of taiko can be understood, and it would deepen the connections between people.”

Into the World of Classical Music

At the same time, this tour made him realize that he did not want to stop himself at taiko. Being in the US made him see the beauty of Japanese culture with a fresh perspective, and he felt the need to learn from Hogaku, the Japanese classical music, to master taiko. He believed that Hayashi (percussion and fue parts of Hogaku) contains many hints on taiko playing technique, composition, and so on. He became a pupil of the Mochizuki style of Hayashi musicians and in 1973, he received his professional stage name as a Hayashi musician, Saburo Mochizuki. Mochizuki composed taiko pieces such as “Shiraume Daiko,” in which he incorporated characteristics of Hogaku, including the unique way of beating time, rhythm, and Kakegoe (Kiai-like voice).

At this point, he had found himself more interested in the world of the classics, though he initially started learning Hogaku to apply the knowledge to taiko. He decided to focus on studying Hogaku and working as a Hayashi musician rather than on his career as a taiko player, and left Sukeroku Daiko in 1970.  However, he soon ended up founding an amateur taiko group, Hatoyama Koin-no-Kai, to teach taiko to local children and adults in Saitama Prefecture.

As a Hayashi musician, Mochizuki plays an important role in today’s traditional Japanese performing arts scene, such as in Kabuki, Nihon-Buyou, and Naga-Uta. He is often invited to perform and teach overseas as well; for example, he held a workshop with his pupils at the 2011 North American Taiko Conference at Stanford University.

One of his principles as a musician is “Do not just pursue classical music. When you look just at the world of classical music, one will end up resting on it and losing inspiration.” Searching for harmony among different elements of music, arts, and cultures have been his mission since the day he sought to incorporate Hogaku elements into taiko. He has successfully fused Japanese classical music with a variety of arts such as Western string instruments, Western pop music, Latin dances, and even recent J-pop music. Having established his reputation in the realm of classical musicians, he continues to search for a new harmony that no one has heard or seen yet.