The World Taiko Conference (“WTC”) is a global event that brings together taiko enthusiasts from around the world for the purpose of promoting and developing the art of taiko drumming. Last year, even though it was initially planned to take place in Japan, the first WTC 2020 was held online due to world circumstances. This resulted in the production of a tremendous amount of valuable insightful video content in the form of live talks, shared repertoire, as well as live panels and presentations all from the global taiko community.

This year, in anticipation of the next World Taiko Conference, WTC was finally able to bring together some of the artists who were a part of the WTC talks, and presented this milestone of a concert: “TAIKO CELEBRATION 2021” on the southwestern island of Kyushu, where there are many taiko lovers in Japan.

This production featured three major groups, all with distinct styles and approaches in taiko expression. The up-and-coming Japanese taiko ensemble of Waraku Soden performed for the very first time as a percussion ensemble in Kyushu. In addition, the Japanese artists of the HERbeat project (the first all-women taiko production), performed as “HERbeat Japan.” And from Oita, which was the host city of this festival, Toyonokuni Yufuin Genryu Taiko represented the high energetic spirit of the local taiko community.

With these three performing groups, all of whom have been gathering attention in the taiko world, World Taiko Conference Presents “TAIKO CELEBRATION 2021” from Japan to the world.

石のうた | Ishi no Uta (The Stone Song)
Composed by: Awa

もののけが走る | Spirits on the Run
Composed by: Awa

Waraku Soden is a music project of up-and-coming Japanese instrumentalists led by Shogo Yoshii, Taishi Yamabe, and Tsuyoshi Maeda. Their unique world of music that blends and develops Japanese music has been highly acclaimed both in Japan and abroad. The ensemble uses a variety of Japanese instruments in order to combine folk and traditional songs from across Japan and thus, creating a unique world of music. In a literal sense, “Waraku Soden” means “passing on the Japanese music through performance.” The artists convey the concepts and notions behind the performing arts as they have been passed on as a part of local life culture. “Waraku” also means “music of harmony.” The artistic director, Shogo Yoshii, aims to present the stage not as a mere collection of different instruments, but as a whole music ensemble through his original compositions. In this performance, Waraku Soden will perform with a special collection of musicians. 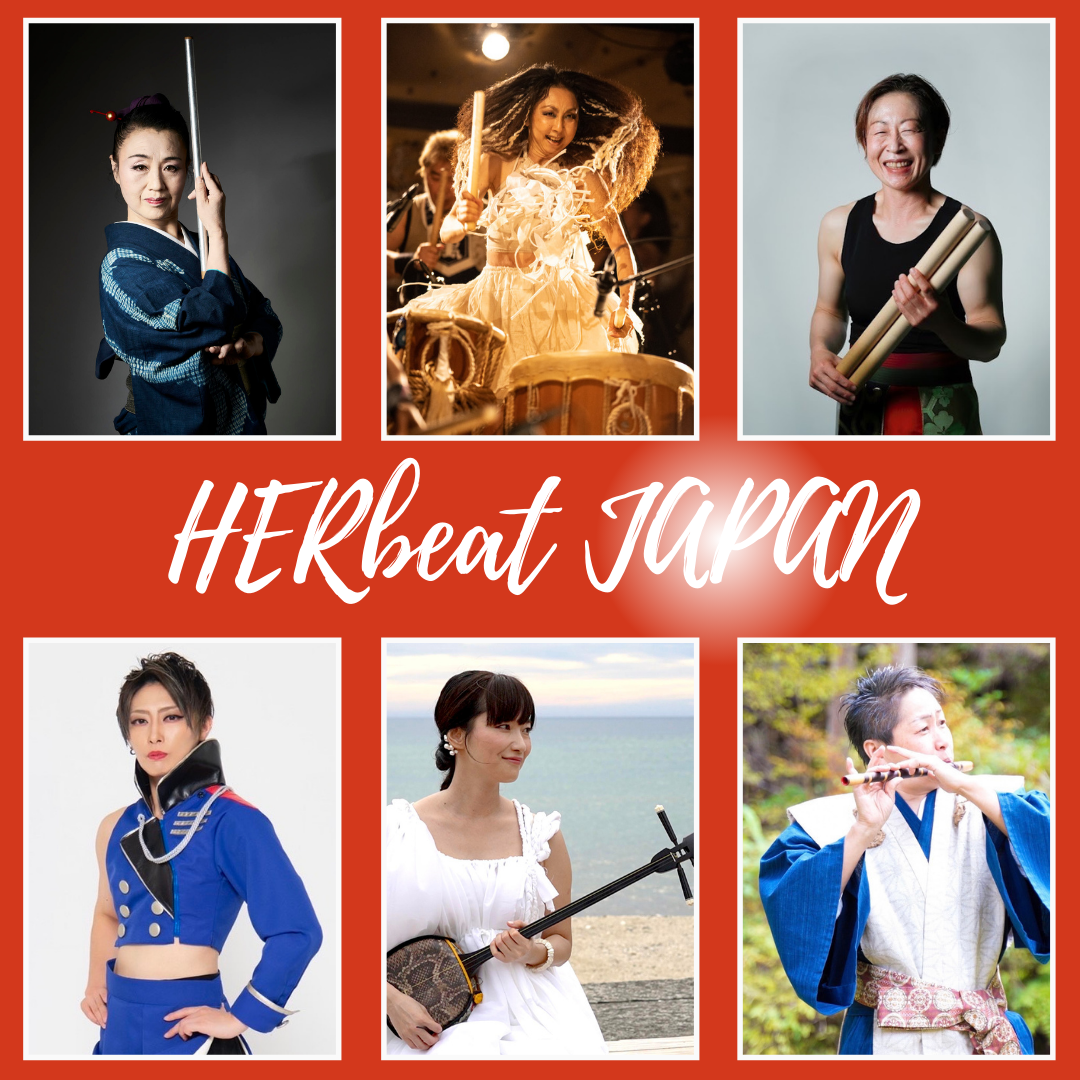 The voices and stories of women have rarely been discussed within our history of taiko. But nowadays, it is said that more than half of the world’s taiko drumming population are women. To celebrate the achievements of female taiko drummers, an innovative concert and project called “HERbeat” was put together by Jennifer Weir of TaikoArts Midwest in Minnesota. In February 2020, HERbeat presented their full concert which featured a cast of some of the most acclaimed female taiko artists from Japan and North America. This year, the Japanese artists of HERbeat has reunited as a special ensemble for TAIKO CELEBRATION 2021.

~HERbeat OURbeat~
When the world was born,
The long years of humankind were woven together.
When the world turn dark of natural disasters,
The drum resounds, the voices are raised, we breathe in life, and we step to dance,
As the warriors of the rainbow give thanks and pray to Mother Earth.
Resounding to our future, ONEbeat

Chieko Kojima first encountered Japanese folk dancing when she moved to Sado to join Sado no Kuni Ondekoza in 1976. She went on to become one of Kodo’s founding members in 1981. In addition to her work with Kodo, she also has an active solo career that includes projects such as “Yukiai,” where she seeks out new encounters and collaborations with artists and taiko groups within Japan and throughout the world. Kojima is known for her original dancing style during Kodo’s taiko-based performances, which is best exemplified by her vivid portrayal of the goddess Ameno-uzume in the first season of “Amaterasu” in 2006. She became a Kodo Distinguished Member in 2012, and was the director of the annual concert series “Kodo Special Performances on Sado Island ” for four years, starting from its inaugural season that same year. She continues to ambitiously broaden her expressive outlets, as demonstrated by her recent productions based on the “Tales of Dojoji,” which then became the inspiration for her first photo book, ” Kasane no Kiyohime Monogatari: The Myriad Layers of Kiyohime,” a unique work created with photographer Maiko Miyagawa and released in 2015.

In recent years, she has been holding workshops on dances rooted in Japanese culture, which she has cultivated over many years, and on the theme of her signature performance “Hana Hachijo,” focusing on the flexible taiko expression that only a woman can give.

In 2019, she performed in “Kodo: Sen no Mai” in commemoration of her 40th anniversary, and has released a DVD of this once-in-a-lifetime performance.

Kaoly Asano formed the group, GOCOO, in 1997 and continues to serve as leader, composer, and performer, establishing a new world fusion style of taiko. GOCOO toured the US in 2000, and toured Europe annually since 2003. As of October 2018, they have performed 240 concerts in 38 countries. Her compositions were used in the film soundtracks of “MATRIX Reloaded”, and “MATRIX Revolutions”.

She has also had concerts in EU, Latin America, Australia, and other countries, and performed at cross-genre concerts (such as Rock, Jazz, and Reggae) including WOMAD in UK, SZIGET in Hungary, Montreux Jazz Festival in Switzerland, BOOM Festival in Portugal.

In the meantime, she also established the TAWOO taiko dojo, holding classes and workshops at various events including at schools from kindergartens and universities. She opened sister Dojos in Hokkaido, Yokohama, Chiba, Ise, Nagano, Homburg, Shanghai, and Brazil, and has taught taiko both domestically and internationally. She has participated in the Third European Taiko Conference that took place in Hamburg,  UK Taiko Festival in 2019, and the kaDON taiko retreat the same year. In 2020, she was invited as a performing artist to join the HERbeat concert to celebrate female performers, sharing her spirit and style to a global audience.

Born in Kagoshima-city, Kagoshima, Mayumi Hashimoto joined “Kirishima Kumen Taiko Hozonkai” and started practising taiko in 1973. She then formed a women’s taiko group Kirishima Kumen Taiko “Wakana” with several others and was active for about 10 years (young members are now active as “Wakana”). In 2002, she was awarded the Grand Champion of Odaiko at the First Tokyo International Wadaiko contest. In 2008, she joined Asano Taiko Co., Ltd. and learned the traditional craft of Wadaiko making. She is a certified traditional craftsman of Ishikawa Prefecture. In 2014, she opened “Mori no Taiko Shop Teco-Teco” (as an Asano Taiko Distributor) in Kagoshima Prefecture with the activities of: Selling, repairing, performing, teaching taiko in and outside of Kagoshima and Kyushu. Currently she’s been working on forming a new Wadaiko Group “Suzaku” (Taiko Unit) to connect taiko with the next generation.

Born in Tsuwano, Shimane-prefecture, Mizue Yamada joined a professional Wadaiko Team “Hono Daiko” in 2004.  Since then she has performed a number of times at various venues, events, and on TV programs in and outside of Japan. In 2014, she founded her own group “DIA+”.  She’s been creating her own world through performing, composing and stage producing. In 2020, she performed in the HERbeat concert presented by Taiko Arts Midwest in Minnesota, and has been spreading her performance scapes worldwide.

Anna Sato, whose rich voice evokes the spirits of her native Amami Island, has won many shima uta (island song) contests. She has released seven recordings, receiving international acclaim for her powerful voice and distinctive singing techniques. Today, Anna’s home island of Amami is officially part of Japan, but the archipelago still has its own dialects and cultural traditions that are distinctively different to those of the mainland.
Anna began learning shima uta from her grandfather, Sumio Megumi, from age three. She has been singing ever since, and in (year) she moved to Tokyo to pursue a career in music. In 2016, she performed in concerts around the world, from New York City to Corsica, France. She also caught the eye of renowned choreographer Sidi Larbi Cherkaoui and participated in his dance production ICON as an arranger and live singer. As a result, Anna has earned innumerable fans worldwide and many more international projects were on the horizon for her. Anna’s mastery of shima uta makes her an important cultural asset both in Amami and for all of Japan. With a deep understanding of tradition and flair for innovation, she at once preserves the rich tradition of shima uta while elevating it to a contemporary art form.

Awa joined the professional taiko troupe, Shidara in 1989 when it was inaugurated.

In addition to being the main performer, she also composed, directed, and led the group.

Her signature piece, “Nie-buchi”, won the Grand Prize at the 1st Tokyo International Wadaiko Contest in 2002.

From 2012 to 2015, she was the chief director of the Shidara national tour, “Ao no Daichi”, and performed as “Kaze-oni-gami”. After the final performance of “Ao no Daichi,” she left the troupe and became a freelance performing artist. She updated her name from Chabo to Awa, and since April 2015, she has been based in the village of Urugi in Nagano Prefecture, where she has been working on her creative work, following her long-time dream: “Handing down to the children in a thousand years is the treasure of nature”. She has released her first album “Tsuki – Silver Moon, Blue Wind”, and her second album “Iwakusa – Memories from Ancient Times”, while expanding her performance sites widely.

She has opened the “Otokusa School” in her base, Urugi Village, and has been teaching and composing music for the stage, based on the concept of “music that springs from the ground of life”.

The rhythm of the soul.

Toyonokuni Yufuin Genryu Taiko was established in 1979. Since its establishment, Toyonokuni Yufuin Genryu Taiko has had numerous taiko performances and appearances within Japan and abroad. They have performed in concerts in more than 60 countries overseas, including the opening of the Shanghai World Expo and the French International Music Festival, as well as major events in Japan, including the National Cultural Festival. There are currently eight members in the group. Though these members have their own career and studies, they come together to train daily and make the effort in spreading and developing the Japanese taiko culture throughout the country and abroad.

In 1993, Tadashi Hasegawa established the All Kyushu Taiko Association and became chairman. He became an honorary chairman in 2012 and continues to be to the present. In 1998, he became a board member of the Nippon Taiko Federation (now the Nippon Taiko Foundation), and in 2008 he became vice-chairman. In 2011, Hasegawa won the prestigious position (Minister of Education, Culture, Sports, Science and Technology Award) at the Japan Taiko Senior Competition.